I’m Not in the Market for a Cannon, Thank You.

Shopping. Again. How is it that the girl that doesn’t like shopping finds herself back at Lekki Market a mere few weeks after a first tentative exploration? I suppose a promise took me back and a promise once made is best kept; I had offered to host an excursion for visiting consultants despite my shopping bias. So back to the market I went to uphold that promise- but truthfully, I was eager to return. I wanted a chance to peel back a layer of Lekki’s facade, to dig a bit deeper beneath the tourista surface in hopes of glimpsing a flash or two of the human underbelly. For me, the best excursions are more about observing and noticing, wandering and discovering; I like to take a step or two back from the action and watch how things unfold. Besides, Greg had not yet walked the dirt-packed corridors of Lekki and that simply wouldn’t do. 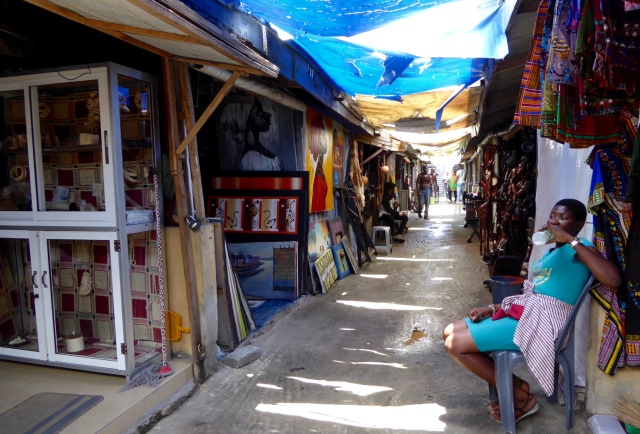 A typical street in Lekki Market; some are paved, most aren’t.

So back to Lekki we went. Temi reprised her role of guide as we were joined by Greg and Sonny (Greg’s old-time friend and tech consultant); another two visiting consultants rounded out our posse. Suffice to say, our group did not blend in, but we were also not the only Oyibo’s at the market. As the day wore on, we’d round a corner in an obscure section of the market only to stumble upon shoppers from any number of countries- China, Italy, the UK- all bent on bargaining for a string of beads, an African mask or colorful table cloth; a memento of their brief sojourn somewhere else, had at a bargain price. In Egypt, when I was approached by shopkeepers insistent that I buy their overpriced wares despite my obvious indifference, I would proudly, and a bit indignantly, proclaim, “Ana mesh hawaaga!” (I am not a tourist!). But I’m beyond such bold proclamations now- the truth is that I stand-out before I even board the plane to Lagos, and that doesn’t change until I return to the States the following summer. This is a different country and I’m living in a markedly different context. In Egypt, I established a semblance of belonging fairly quickly that I’m not so sure I could duplicate so readily here; hence there is a different set of rules that govern my social interactions outside of the artificial environs of work. I’ve gradually come to accept that this reality is different from my previous, so I focus on capitalizing on opportunities rather than lamenting barriers.

Perhaps this is why I was looking forward to returning to Lekki, and why it is clear that Temi is the constant in my shopping equation. Temi somehow manages to procure each coveted trinket with a mix of humor and intrepid bargaining skills, deftly managing her inexperienced and disoriented charges with one hand, while maintaining price control over a cadre of hard-bargaining shop keepers with the other. She is a true master. Knowing that our two consultants would be well taken care under her watchful eye, Greg, Sonny and I quickly wandered off; none of us was particularly interested in buying, but we were highly motivated to explore. And indeed, after spending a short time at Lekki Market, it becomes glaringly apparent that essentially the same items are repeated in row after row of stall, over-flowing with trinkets and manned by shopkeepers with helpful tips like, “No charge for looking” and “Come inside, I have what you need”. At Lekki, everything is authentic, hand-made in Nigeria, and at the best price one could possible hope for.

A moment at Lekki

Paintings, lighter fluid and other sundries

So the three of us slowly walked the lanes, ducking into a shop here and there to look and banter with a shopkeeper, but not to buy. Occasionally, we would end up with a trinket in our hand, or venture further into the recesses of a stall to appease an insistent seller. Soon, we each found our own personal comfort zone of refusal. Sonny was an enthusiastic and curious questioner of shopkeepers; he’d ask for the backstory of each item eagerly thrust into his hand, readily agreeing to it’s inherent value and beauty, but eventually each session ended with the finality of “I’ll be back another time“. Greg was the master of genteel kindness; stopping to take the time to thank the person for sharing his or her product, hand on heart with a “Hello sir” and “Thank you sir” and “I’m not buying today, but thank you“. For my part, I simply pulled the wife card, proclaiming “I’m waiting for my Oga” motioning back towards Greg. This is a culturally effective strategy, as respect for an Oga, loosely translated as the “Big Boss” is paramount in Nigerian society; of course I wouldn’t wander off without my Oga! With no particular destination in mind, we circled back into areas we had already walked and were eventually left to our own devices. I took pictures as we wandered, focusing on the kids and people living and working in the area; I received a hug from a little one, a request for a picture from another, and a general sense of acceptance, or at least tolerance by those hanging out and about the market. As the afternoon wore on, it became hotter. Reprieve from the heat was fleeting, found by stumbling upon a serendipitous cross breeze at the convergence of a corridor. The guys took time-out to rest hot and swollen feet by taking advantage of an empty bench or chair. Temi was still busy shopping with the consultants, so we watched and noticed; it was my perfect afternoon. 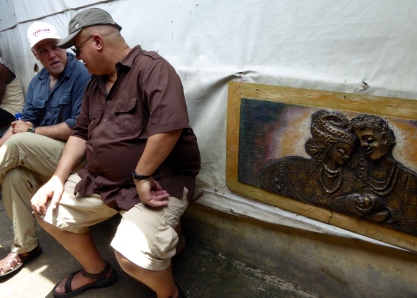 Sonny and a Nigerian Elvis

At some point in our wanderings, one of the guys needed the toilet. I had wisely deprived myself of water out of self-preservation; I have squatted over many a shack-covered hole, pants around my ankles, desperately trying to hold my breath and balance at the same time as flies crawled the length of my arms and thighs. Now, I’m always up for an adventure, but I do prefer to do my business in a more sanitary environ whenever possible. We eventually found Temi, who tasked one of the locals with taking us to the toilet. This is the same guy that followed Temi, Michelle and I around Lekki a few weeks earlier, desperate to sell us anything. Though his luck was not with him on that day, he was rewarded for his persistence; Temi allowed him the right to spend this day shuttling back and forth between her and the consultants, and the three of us- I’m sure to make sure we didn’t wander off too far. This unsolicited task would earn him some Naira upon our departure and a permanent position as our Lekki Market minder and guide. It seems there is only one public toilet in the market and naturally it was located next to the meat market; I was intrigued.

Watching the world wander by 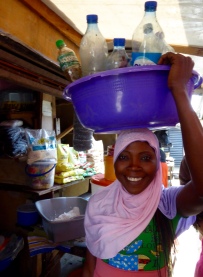 An interesting request to take her picture, though she would never receive a copy 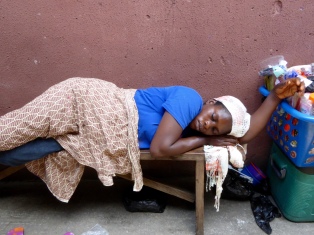 Life is lived in public 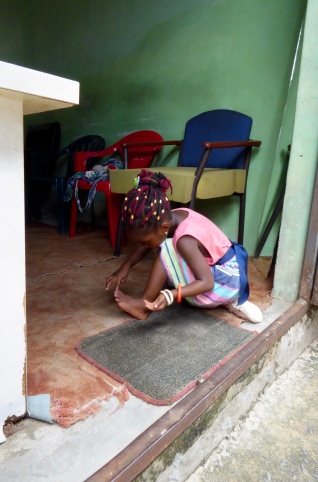 After the toilet, we spent a bit more time wandering the tourist section. Greg countered an offer to purchase an odd bit of history with the logical response, “I’m not in the market for a cannon, thank you“; it was clearly time to expand our stomping grounds. I was convinced we should go back towards the toilet to find the local meat market. Though sure to be horrific, it’s a sobering reminder of what those that live outside our expat bubble must do to survive, which I think is important to remember- but cooler heads prevailed. We had told Temi where we wanted to explore a bit, so she tasked our guide-for-the-day with leading us towards that general area with a strict admonishment spoken in rapid-fire Pidgin that we had best make it there and back without incident. Although we skipped the meat market, this gave us the chance to encounter a large piece of steaming Kpomo as it was being pulled out of a boiling vat of water. What is Kpomo, you ask? We asked our guide this very question as it was indiscernible for all it’s soft parts. He explained it as an animal’s skin that is boiled for hours to soften before being cut into strips to add to soup. The piece we saw had been stewing for hours inside a sawed-off metal drum precariously perched above a wood fire in a large central clearing devoid of trees or shade but full of flies, trash and a few scrawny kittens. There were piles of bones marking the passing of animals; I swore I’d never try Kpomo.

A path to the local meat market

Imagine my surprise when I discovered that one of the ingredients for making Edikang Ikong, a dish native to the Efik people of Calabar in the South South region of Nigeria is Kpomo. Why is this surprising? Because I recently had the opportunity to try this dish which was billed as the way to a man’s heart; little did I know I was trying a delicacy of boiled cow hide along with a mixture of snails, dried fish, palm oil, and boiled pumpkin and water leaves. Now I know that the Kpomo I tried didn’t come from that boiling drum I saw at Lekki Market, but you can imagine the vivid imagery that flashed through my head when I discovered what I’d eaten. Ah geez.

Back to Lekki. After our education on Kpomo, and starting to feel like a voyeur for taking pictures of it, we walked back to the now familiar world of the tourist section. How did our afternoon end? Sonny eventually found a batik table cloth he could not let pass by and watching him bargain with the shopkeeper was one of the highlights of my day. After going back and forth on price, Sonny finally settled at N25oo and a hug. This turning of the bargaining tables was a bit much for the woman who proclaimed, “A hug! I’m an eighty-year-old grandmother!” But, commerce won-out over modesty; she sold her table cloth and Sonny got his hug. 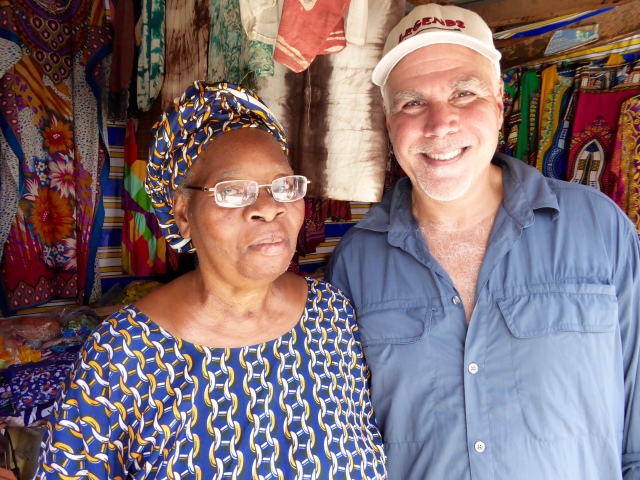 For our part, Greg and I left Lekki with nothing more than a camera full of pictures and another wonderful day spent together. I love my husband and I love our life; I cannot imagine spending an afternoon in a better way. We will eventually make our way back to Lekki because truth be known, there are some items there we’d like to take back home-home; we spotted a simple, utilitarian chair, perhaps a yam pounding chair (and pounder) and there are some pretty cool traditional wooden doors from Mali that would look great hung on a wall. Yes, we’ll return with a shopping agenda, but we’ll still take time for pictures, conversation with the locals, and perhaps we’ll make it to that meat market after all.

Greg and Kim at Lekki Market

7 Responses to I’m Not in the Market for a Cannon, Thank You.

"I love to sail forbidden seas and land on barbarous coasts." ~ Herman Melville

"I love to sail forbidden seas and land on barbarous coasts." ~ Herman Melville

Indivisible, with liberty, and justice: Actions4All